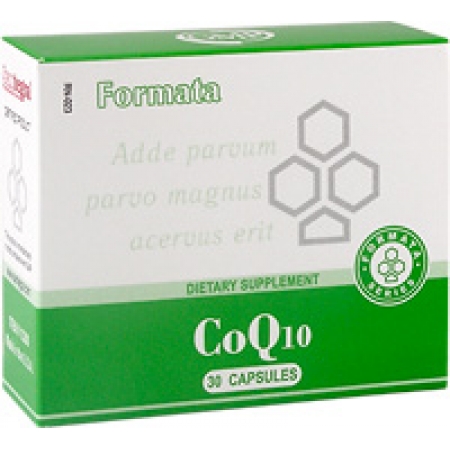 Price: 19.80€
Add to Cart and Pay with PAYPAL
Add to Wish List
Add to Compare

In today’s world a growing number of people are suffering from cardio-vascular diseases. And in spite of the fact that statistics are far from comforting, we have the power to change it. Our health and longevity depends only on us, and our life style. It is not a secret anymore that one of the major factors of a healthy lifestyle is proper nutrition. If for some reason your body does not receive an adequate amount of vitamins, minerals, and nutrients; food supplements can help.

One of food supplements associated with heart health is Coenzyme Q10.
Ubidecarenone is an official name of Coenzyme Q10 in Pharmacopoeia of the USA.

Coenzyme Q10 is a widespread substance, found naturally in every cell of the body of every human being, animal, and even microorganism.

Coenzyme Q10 was first identified in bull’s heart mitochondria in 1957 in the University
of Wisconsin (USA). (1) In the 60’s of the last century CoQ10 started being widely used in Europe and Japan.
Studies conducted on this co-enzyme in the past years demonstrated its vital importance for the body’s normal functioning.

First of all CoQ10 is crucial for the energy production in the mitochondria of living cells.
Second, CoQ10 is a potent antioxidant, which protects cells from free radical’s damage.
CoQ10 is required for all organs in the body, especially those with high energy demands.

Coenzyme Q10 provides an increasing energy in the cardiac muscle and it is essential for the heart, since heart requires twice more energy than other organs of the body.
Unfortunately the CoQ10 content in cells is decreasing with age. The research shows that a maximal content of CoQ10 is observed between the ages 19-21, and by the age 80 it drops down to 65%. (2)
Other factors that decrease the CoQ10 level are an unbalanced diet, harmful effects of the environment, intense physical work load, and some medication.

Our body is capable of producing Coenzyme Q10 in a sophisticated process with a lot of different enzymes, vitamins, and microelements present. The synthesis of CoQ10 can be complicated by lack of some substances inside the body, since the diet of modern man is far from ideal. You can fulfill the CoQ10 deficit in your organism with the help of some food products such as the inside organs of animals, mackerel, sardines, peanuts.
The necessary daily dose of CoQ10 is 30 - 90 mg. To achieve this dose you have to eat more than a pound of sardines, or two pounds of beef liver!
It is established that most of us only receive 2 to 10 mg of CoQ10 daily; an absolutely insufficient amount.

It is considered that the decrease of CoQ10 level in the body by 25% can trigger the pathologic process mechanisms causing cardiological diseases, diabetes, parodontosis, weak immune response, and an overall decrease in vitality of the body. That is why it is so important to take supplemental CoQ10 for middle aged and older people.

Adequate amount of CoQ10 is vital for the proper immune system functions. Different medical trials demonstrated that CoQ10 increased the phagocytic activity of macrophages, and increased the amount of antibodies.

CoQ10 is useful in dealing with allergies.

Clinical trials showed the positive effect of CoQ10 on gums.

CoQ10 normalizes metabolism, acts as catalyst in fat burning process, helps with weight control, and increases endurance of the body.

CoQ10 helps avoid premature aging, acts as natural anti-oxidant, and protects from the harmful effect of free radicals, and as the result of this has a positive effect on the internal state of the body, and the appearance.

But not all the forms of CoQ10 are equally beneficial.
There are natural (trans) and synthetic (cis) forms of this substance. Natural Coenzyme Q10 is much more preferable than synthetic, because it is identical to Coenzyme Q10 produced by human body.