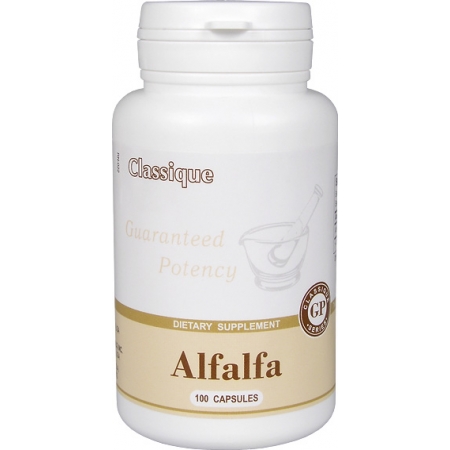 Price: 10.60€
Add to Cart and Pay with PAYPAL
Add to Wish List
Add to Compare

“Father of all herbs”, this product contains the unique spectrum of vitamins and minerals.

Alfalfa (Medicago sativa), also known as Lucerne, and Purple Medic is used in herbal medicine for centuries. First it was discovered by the Arabs, who named this valuable plant "Al-Fal-Fa" which means "father of all foods".

This wonderful herb has the ability to cleanse the body of toxins, support healthy heart and liver functions, improve appetite and digestion, and increase endurance.

In traditional Ayurvedic medicine Alfalfa was prescribed to improve digestion. It was considered useful to get rid of extra fluids from the body, and also for arthritis. North American Indians used it to treat jaundice and to improve blood coagulation. In the 19-th century American doctors recommended Alfalfa as a tonic for digestive dysfunctions, dyspepsia, anemia, lack of appetite, and better nutrient assimilation. They also used Alfalfa to increase lactation in breastfeeding mothers, and the seeds were made into a poultice for the treatment of boils and insect bites.

Alfalfa, rich in fiber, belongs to legume family; it possesses many qualities beneficial to human health, and is widely used as a dietary supplement.

It is suggested that this plant helps to purify the body, to decrease the cholesterol and sugar levels, to support liver and heart functions, to relieve menopause symptoms, to increase energy level, and to fight fatigue.

Alfalfa has a wide spectrum of action due to its active ingredients, such as saponins (about 2-3 %), flavones, isoflavones, sterols, and coumarin derivatives.
Alfalfa is rich in chlorophyll, fibers, proteins, contains vitamin A, B1, B6, C, and E, vitamin K, calcium, magnesium, phosphorus, potassium, iron, zinc, polyunsaturated fatty acids, and some proteolytic enzymes, that break down proteins and facilitate its assimilation.

Animal clinical trials showed that saponins in Alfalfa bind with cholesterol, help with its removal from the body, and prevent atherosclerotic plaque formation.

The results of one clinical trial proved that Alfalfa has an ability to reduce cholesterol level in humans.

Saponins, similar to those found in ginseng, can show adaptogenic activity and ability to stimulate cardio-vascular and nervous systems.

Isoflavones in this herb show estrogen-like activity, and therefore Alfalfa is recommended for relieve of menopause symptoms.